I read somewhere that the two most valuable classes a college graduate can have are Creative Writing and Improvisation.

Do you remember the freedom you had as a child to create different worlds in your back yard or in your bedroom? The big cedar tree in our yard became a mountain that needed scaling, the washed out ditch became the dungeon, and the field up the street became the lunar surface…cow patties and all. As I sat in the second grade class at Golson Elementary School and listened to Mrs. Brudeshaw trying to teach this hyperactive child about subjects and verbs (which were way beyond my comprehension), my little simple mind was running on the moon, or fighting evil sorcerers in some castle. I could not wait for that 3:00 bell to ring.

Unfortunately, my fantasy filled mind continued until I was well into my teens. I vaguely remember something about American history and Great Expectations, but mostly high school was a blur. So much so that in the middle of my eleventh grade, I did the unthinkable…I became a drop-out. I did, however, receive my GED a few years later.

To this day, my mind is preoccupied not with fantasy but with creating. I am an artist! I am so glad I never became inhibited. I remember watching my high school classmates going to college and becoming serious, getting married and becoming more serious, having children and becoming even more serious. Ugh, what bores!

I had a dark secret though; I wanted to be just like them.

Not until I found improvisation did I realize there were things out there in the world that I could do…and do them well. Dictionary.com defines improvisation as, “the art or act of improvising, or of composing, uttering, executing, or arranging anything without previous preparation.”
Translation: make it up as you go.

Improvisational games are used to help decrease an actor or student’s response time to stimuli. The thing that most folks do not realize is that we are improvising everyday of our lives. Every conversation we have is improvised. Every time we go for a stroll in the park or the neighborhood, we are improvising. So why are so many people afraid of improv? Well, you see, you have to do it in front of an audience. For some reason, everyone’s brain shuts down when they have to speak in front of an audience.

All of the games help the actor or student overcome the fear of being in front of an audience. The games help you think quickly (that’s what the business world wants – someone who can think on his or her feet), and just as important, the games sharpen your critical thinking skills.

ImprovRising is the Savannah State University’s improvisation group. We had the final performance November 10th. The performance was wonderful. Everyone in the class turned out to be huge hams.

Several of my students (non-theatre majors) ask me about the photo of the ancient amphitheater that I use on this blog. To me, it is the holiest of holy places for a theatre person to visit.

It is the Theatre of Dionysus in Athens, Greece.

As a grad student at the University of Florida, I had the great opportunity to tour and perform in Greece. Our hotel in Athens was within walking distance of the Parthenon and the Theatre of Dionysus. We did the typical tour of the area, but I went back to the amphitheater alone. I wanted to sit peacefully alone and contemplate the past.
Even though what you see in the photo are the remains of the Roman’s construction, the essence of the ancient Greek souls who once walked that hillside moved me in such a way that I, to this day, do not understand. I imagined all the choruses, playwrights, actors, musicians, and technical crews producing plays for the thousands who sat on that hillside.

I think that was the moment I realized who I was and my reason for being. I felt lucky that at 45 years of age, I experienced that. Most people live their entire lives without finding it.

Now, if you know me, you know that there is a funny experience hiding in this story.
I thought to myself as I sat on that hillside, “Why don’t I grab some of the dirt and take it back to the States with me?” That way, I’d always have the Theatre of Dionysus with me!
I shoved two big handfuls of dirt in my pockets and hightailed it back to the hotel. By the way, we were staying at the Hotel Hera…and boy was she pissed at me.
I don’t think any of the gods were happy about me stealing from one of their sacred places.

I returned home, found a beautiful little glass container, filled it with the dirt and put it on display in the living room. I finished my Master’s program. Wow, I owned a degree!

Not long after that, bad things started to happen. I had financial problems, health problems, relationship problems, work problems…if anything could go wrong, it did.
Was the dirt my Hope Diamond? I thought about sending it back to Athens. “I’ll just send it to the Hotel Hera…that’ll get her off my back!”

Needless to say, it wasn’t the dirt causing all of the problems…it was my attitude. I had a bit of a superiority complex…hey, I owned a terminal degree!

Ten years later, the dirt still sits on the mantel, and things in my life are wonderful…I had an attitude adjustment.

So, what’s the moral of this story? The spine? The through-line? Everyone has stupid stuff going on in their lives. Pay attention to what is important. Get a little dirt under your nails. Own everything that happens to you. That is what makes you a strong individual! 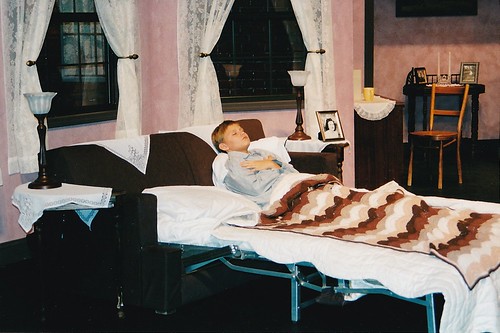 More than likely, every actor has had that moment on stage when the dialogue slides off of your Teflon coated brain. This is the equivalent of dying on stage.

The worst night of my life happened during the run of The Boys Next Door. The story is about a house full of mentally challenged men, and my character was a bit hyperactive. For some reason, and to this day I do not know why, I started hyperventilating during one scene. I think the loss of oxygen caused the dialogue to disappear! The more I hyperventilated, the more I panicked. “I’m going to pass out,” I thought to myself.

Luckily, one of the other actors noticed I was struggling with my lines and jumped in to help me get back on track. We did a little add-libbing and finished the scene.

“Never, ever will that happen again!” That was an important moment in my career; I realized I needed real training.
So, to all of my teachers, instructors, and professors I say a huge thank you! You taught me to breathe.

Speaking of dying on stage, read about the death of Jean-Baptiste Poquelin aka Moliere.

University of Florida’s Space for Acting

Anton Chekhov’s The Seagull is one of my favorites. The photos are from the University of Florida School of Theatre and Dance’s production of The Seagull. The production was directed by Dr. Judith Williams. I first shaved my head for this production.
The photo includes Salome Martinez, Brian Natalie, and me. The other photo is Tom Lapke and Robin Thomas. What a dramatic bunch we were…even though Chekhov called it a comedy!

What do you need in order to call an event theatre?

Let’s first look at the spelling of the word theatre. What is the difference between theatre and theater? I have heard so many difference reasons for the spelling; my personal favorite is theatre is the art, and theater is the building.

That is why you see a movie in a theater. In today’s society, both theatre and theater are used interchangeably. If you see the word theater in any of my posts, know that I am speaking specifically about the building.

So, what does an event need in order to call it theatre? For a long time, I thought two things were the minimum needed…actor and audience, and nothing more. I can hear the screams now.

What about the script!?

You really don’t need a script to have theatre; however, you do need something that is being performed. If I walk on stage, and the audience watches me but I do nothing, can we still call it theatre? Of course we can! Even inaction is action in a play. Even in doing nothing, I am doing something. Remember, actors are the in the profession of lying in order to tell the truth.

So, let’s not call it a script; let’s call it that which is being performed.

The theater is holy ground for a lot of people. Theatre can influence the minds of the masses.

Ever wonder what we're up to at Armstrong? Keep in touch here!

Sims 4 Stories and Musings by MsPhy

We explore the science, technology and art of the still and moving image, and its impact on our lives.

The Art and Craft of Blogging

The latest news on WordPress.com and the WordPress community.